The 2nd day started really late. The bus departed at 9 am. We got our make up stuff and some final costume parts with us (our props were already at the expo)

The backstage of the Kitsune stage was the headquarter of the ECG representatives.

The Kitsune stage is a small Cosplay stage in one of the main halls where you also can find several Cosplay related booths.
Everyone had a little square where he could store their props or just chill out.
They also had changing rooms and a small area with tables and electricity as well as a table with water, small snacks and an interesting pile of ice tea (which mysteriously got bigger Oo not smaller…).
They scheduled 1,5 hrs for changing, so we could take it slowly.
After changing they started the lottery for the performance order of the ECG finals.
Every country went up to the Kitsune stage, answered 1 or 2 questions from Benjamin and took one lottery ticket. The starting numbers are country wise to ensure the maximum “gap” between the 2 skits of one country.
Our Solo representative Yuna tried her luck and got us (group) the starting number 1 and for herself the starting number 8.
Some people were pretty confused, because we were really happy about the starting number.
To be honest, we wanted this number. We realized that if you start the show, you can see all the other skits without being nervous and enjoy it freely. We are also through the rehearsals first and have plenty of time afterwards to take care of the problems, which might appear and to change back (we did all rehearsals in full costume). Or just start packing, while the others still need to wait for their turn.
As a singer I am always the starting number one of the show for the next 30 minutes. So I never felt this pressure of “being the first”.
After getting our favorite starting number we got lunch backstage. The epic staff brought us several sandwiches, desserts and drinks from which we could choose freely. It was pretty tasty. After the lunch we got ready for the presentation.
﻿﻿﻿﻿﻿﻿﻿
The presentation was held at the Ichigo stage (main stage) and was right before the Cosplay show at Thursday. We just walked up to the stage (country wise in alphabetic order), went to the front, made 2 or 3 poses and went back.
After that we had freetime.
We both changed back and started to build our props for the rehearsals, repaired our costumes and props (the swords got some ditches from the transport and one of the holders fell apart) and got everything ready for the next day.
Nearly everyone builded up their props and repainted their armors/ props. 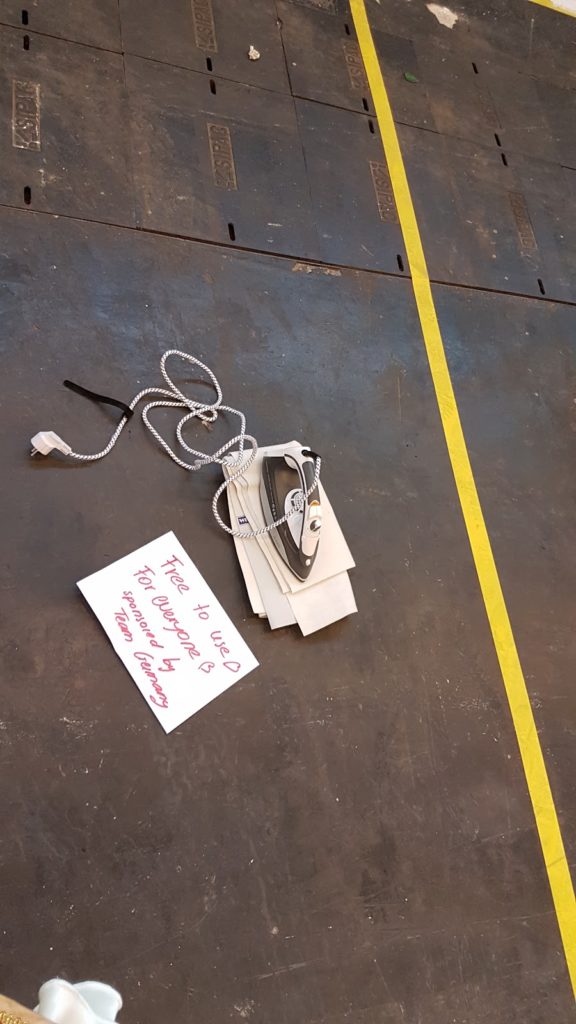 Because we knew that the Japan Expo is in the nowhere, we brought a survival kit which includes everything we might need to repair something (6 different types of glue, 5 different types of tape, screwdriver, paint, needles, yarn, paint etc etc tec) we could provide everyone with pretty much everything and opened the “iron square”. XD
After that we took the bus back to the hotel.
A lot of people told me that we food at the restaurant won´t be good. But actually I was really happy. ToT We could choose 2 buffets (main dish + starter or main dish + dessert) and it was just super super tasty! They hade a “make yourself burger” station and we dessert was just super super tasty!
Thanks for feeding me so well. ToT I ate a lot during the few days!