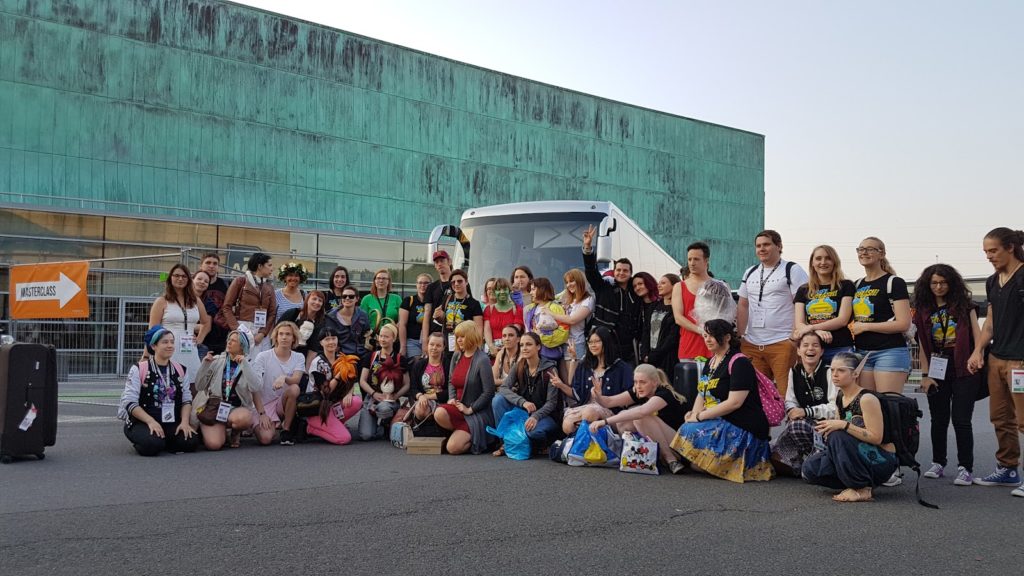 This was actually the worst day. I had never so much stress in my life before. Iam not very confident in my crafting skills and we knew that our costumes are far from perfect.
So we were already pretty pretty nervous the night before.
The bus took us at 9 am to the location and we had judging at about 2 pm.

I needed to build up my swords for transport reasons and repainted the 2nd side of Chikos sword. I also needed to restyle the fringe of my wig.
Getting into costume took like forever.
We had one helper (Kaddle was just the best girl ToT) and still had lots of problems. 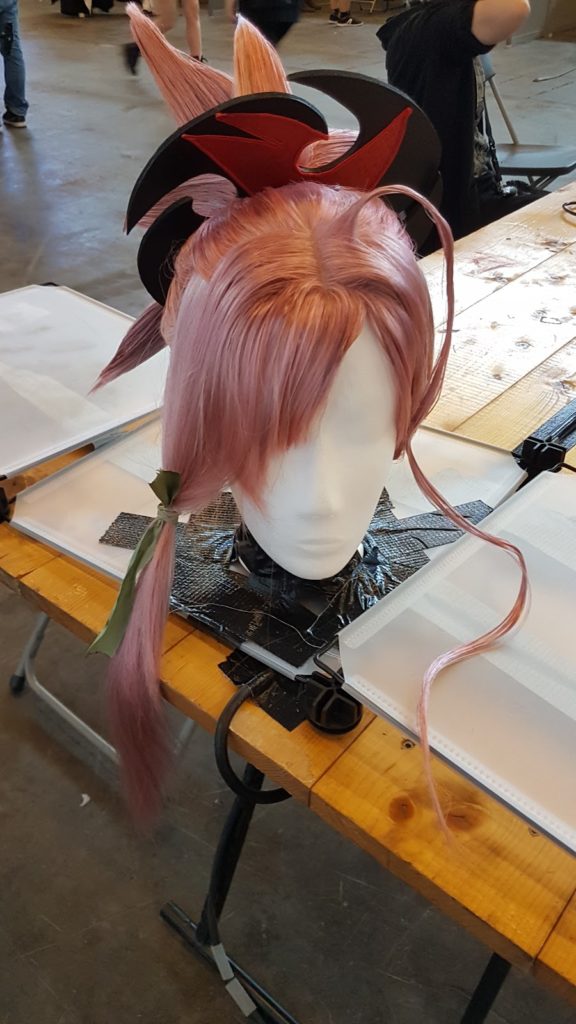 Unlike WCS and C4 you don’t have an own designated changing place. They have a separate changing room for everyone (not only ECG but also the other French Cosplayers!), but not enough chairs, tables and mirrors. So everyone was fighting for it and tried to get at least one of the few chairs and tables.
It was also unlucky that you needed to use the public toilet. So waiting for 30 minutes was not unusual. This added a lot of stress due to the already tight timetable.
We had our own Make up mirrors, which was the best idea ever.
(Memo to future teams, bring your own chairs and tables if you need them to dress up, Netherlands brought a bench or do your make up in the Hotel).
At Japan Expo the place is very limited, so I guess the organizer had no other choice. The team still tried their best to provide us with everything. But I think its important to know, so the future teams know what to bring.
As I mentioned I was super nervous and all the circumstances just added more and more stress to myself.
I also need to say that the costumes of the other participants looked amazing. And yes it was intimidating. I felt so happy to be able to stand on the same stage with all this talented cosplayers, but I just really felt like a damn potato next to them.
The noise didn´t made it better; you needed to scream whenever you wanted to talk to someone. everything was directly behind the Kitsune stage, so you heard the music and drummers from the stage the whole day.
Also the participants were stressing out because of the stage for the finals. 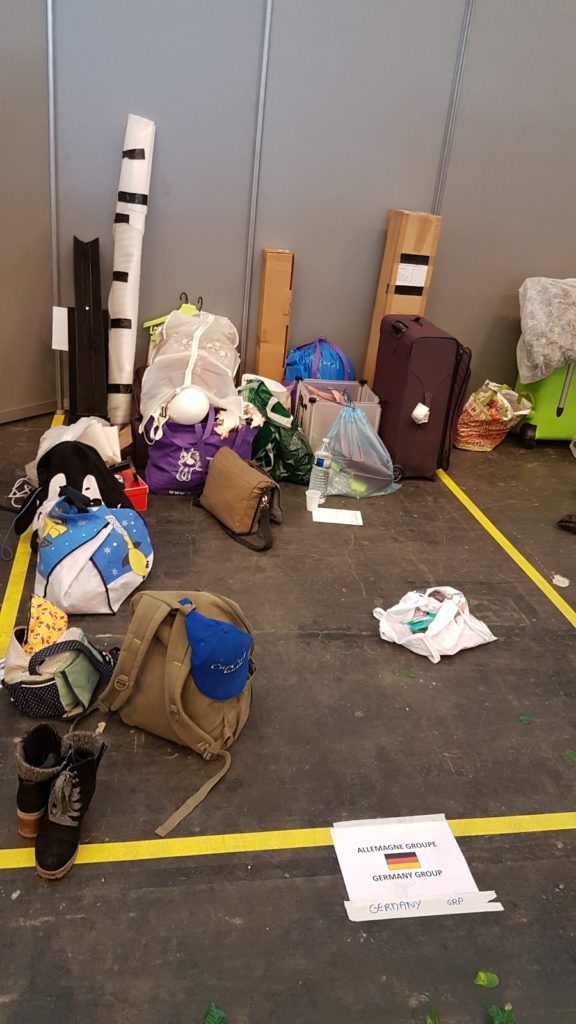 The stage was way shorter than the ECG told us beforehand. We realized it at the presentation the day before.
A lot of participants needed to find a plan B or tried to rewrite the choreographies for their final skits. (We learned later that they fixed it (Iam still so grateful for that thank you ToT), but at this moment everyone tried to arrange themselves with the new measurements of the stage).
The judging room was an open space at the Kitsune backstage (were everyone walked around and were it was super noisy).
When we had our judging turn we had huge problems to understand the questions of the judges and weren´t sure if they could understand us (at least they nodded ToT).
We tried to scream what we wanted to say, but we just had a few minutes (4 minutes per Cosplayer) we needed to rush. The judges were really nice and sweet. I was just super super super nervous.
I expected the wig judging afterwards but learned, that the judging will be made at Saturday right before the finals.
Chiko and I decided to rehearse in full costumes, cause we know that our costumes and especially the wig will slow down our movements or might make problems during our fight.
I still let my wig judged on Saturday but she was already disheveled after the rehearsal.
We took some pictures of our costumes, got lunch (nom nom) and made our first video shoot (the staff understood my problem and tried their best for it). 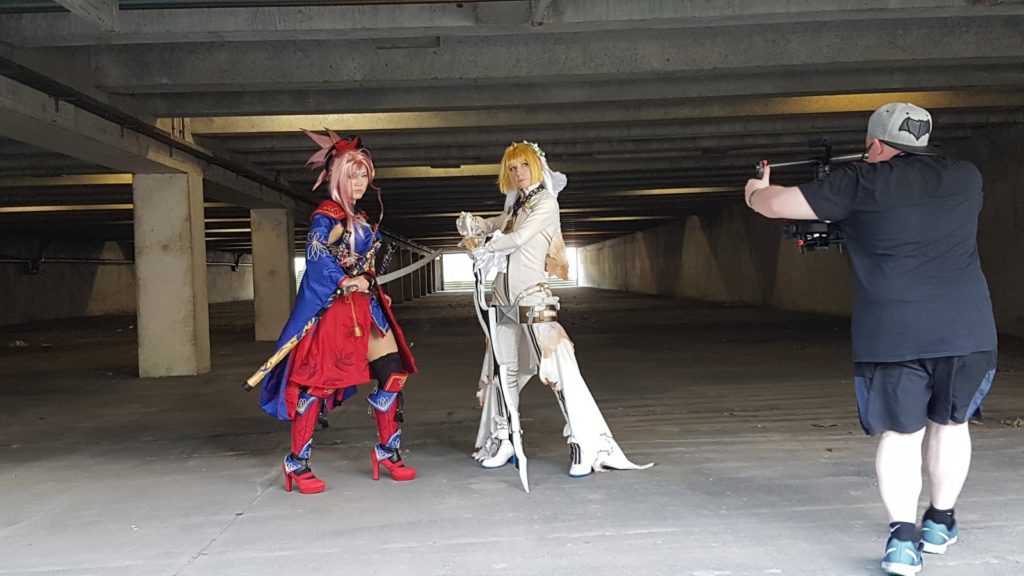 Afterwards we brought our props over to the Ichigo stage and got ready for the first rehearsal.
The epic staff people came to us and asked for the placement of the props. We already gave them the documents a month before, but because we already experienced WCS we printed our everything again for them and handed them our script.
The rehearsal didn´t went well. I was tripping over my own props and struggled with the surface of the stage (we had a scene were I slided under Chiko but couldn’t do it, because the surface was carpet and not slippery at all, so we needed to change the choreography, but we had a Plan B for this case so it was no problem).
The light was pretty off, but I know that rehearsals are mostly like this so I just changed back and hoped that tomorrow will be better.
The Epic Team really gave their best for every representative to place the props and to support us. Thanks to you guys for all your hard work and kindness!
We packed and went by bus to the hotel had dinner and went to bed. Everyone was pretty exhausted and knew that we had to be at the bus at 7 am the next day.