After a very short night we wake up, got some breakfast and got into the Lobby to check out at 10am.

Because they forgot to tell the participants to check out at 10 am, the students where running around at about 9:45 am, knocking at the doors of the representatives and panicking, because most of them were still sleeping. XD Poor students, but it was kind of funny situation.

The first bus was supposed to leave at 10, but you can guess that it was impossible.

The elevator was packed and we waited a long time just to get into the elevator to the lobby.
But because we were in the B block bus, we still hat time till 11:30 am till departure to the special tour (we got that information at about 10:30 am XD).﻿﻿﻿

So we sent our luggage’s to the next hotels and waited in the Lobby.

At about 11:30 am we departed with the bus and made a small stop at the sea.

This stop wasn’t planned. Because the A Block bus departed too late, they arrived too late at the “Soba making experience”. It was planned, that after A block finished their soba making the B block bus would arrive and the next people would start making their own noodles.
This is why we had a stop in order to catch up with the delay and were sitting around at an air-conditioned iceshop. Actually it was really fun! We all got some Kakigori and spent some great time with each other.
After getting back into the bus, we arrived at the “Sagami soba making” place and met the other teams from the A bus, made a small group picture and went up to the Soba making place. At first we got a small introduction, washed our hands, put on our apron and cap, watched an introduction video and started to stretch the dough and cut it. Of course we got filmed in this beautiful outfit. XD

It was really fun although Chiko and I were very bad at cutting slim Soba noodles. XD
Afterwards we went to the restaurant side and got our selfmade noodles with some Tempura and Sushi. It was really fun and Team Denmark gave me all their noodles.

After getting our lunch we went back to the bus, went shopping in a super market and drove to a traditional Ryokan near to the beach. We got our room numbers beforehand and I was so lucky to get a room with the both Brazilian girls.
The Ryokan was in the middle of nothing (but you still could get a LOT of Pokemon XD) with a lot of nice traditional Japanese rooms. They also had a very nice Onsen with an outdoor part for both genders.

After arriving we could choose our Yukatas for the stay and brought our whole stuff to the rooms, changed and went back to a meeting hall where we made some group pictures.

Afterwards we met in the dining hall were we got some really tasty traditional Japanese course dinner.
At every row you could find a sign with your countries name. So we searched for Germany and sat down with our cute Omotenashi student Yuuka chan and our awesome organizers Patrick, Iris, Mo and Laura.
After some warm words we got our food, which was SO tasty! They also had Tempura and a whole lobster. They also arranged a small Karaoke contest where I took part. 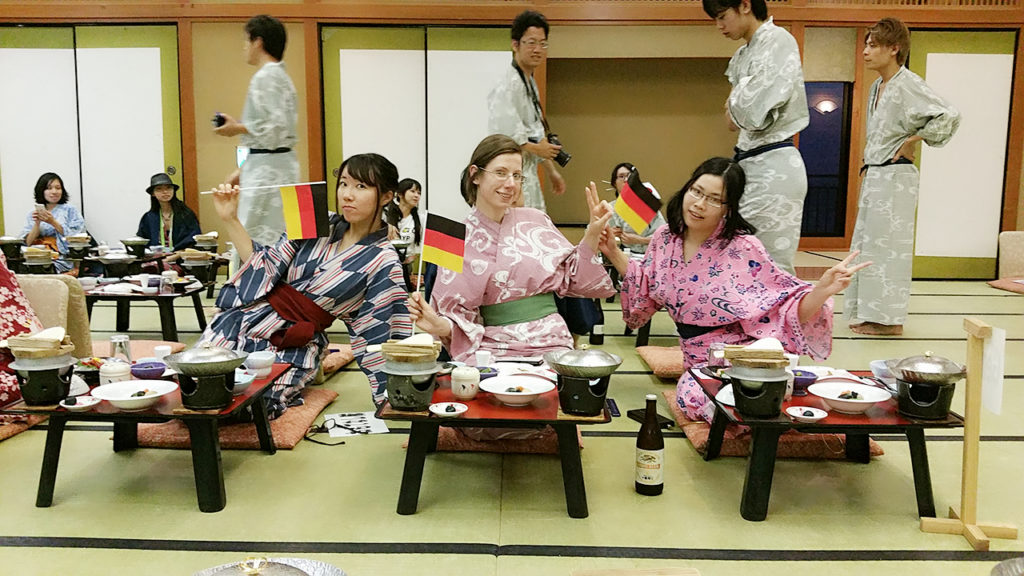 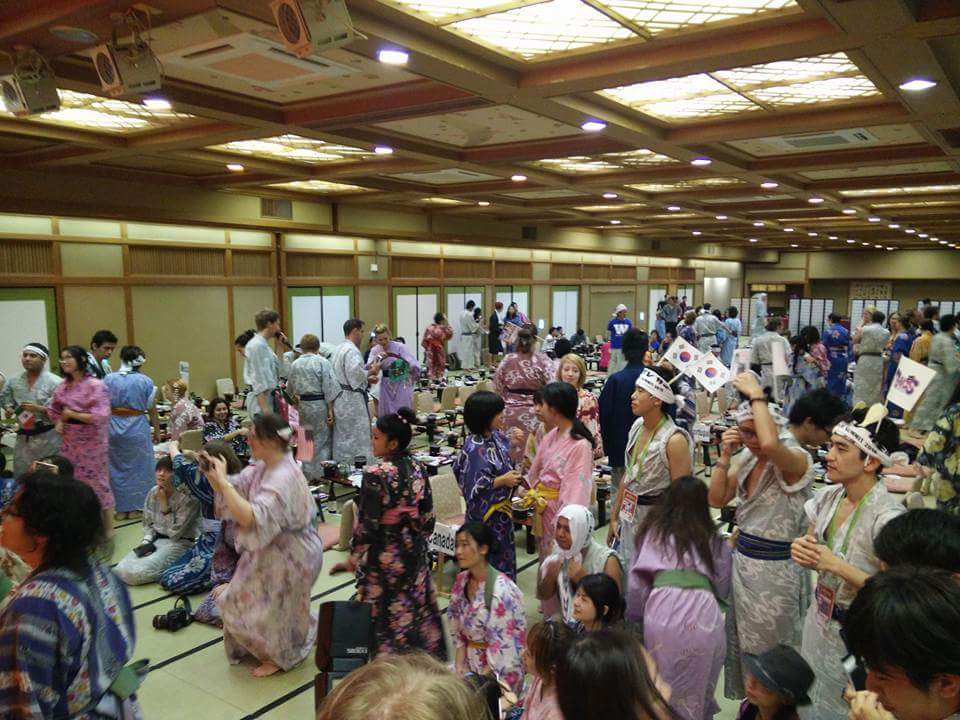 After eating I sang a song and had a lot of fun with the other participants during Karaoke.
We also made a lot of pictures and exchanged some presents with our cute students Yuuka chan and Eriko chan. To make a picture with this hat is a tradition of the WCS.
After finishing our food we went to the Onsen and relaxed a bit.
It was a really fun time with all the girls at the outdoor Onsen.
After the Onsen we had some party and spent our last time together.
At the next day we needed to say bye bye. And I really cried a lot. Because I was so sad to say good bye. I know that I can somehow meet the European friends again, but I wasn’t sure how it was with the people from the other countries. I will give my best in order to meet them again and to spend more time with them. It could make so many friends, who I really started to love. I am still missing them a lot.